A Land Port of Entry, also known as a border station, is a facility that provides controlled entry into or departure from the United States for persons and materials. It houses the U.S. Customs and Border Protection, and other Federal Inspection Agencies responsible for the enforcement of federal laws pertaining to such activities. The Land Port of Entry consists of the land, buildings, and on-site roadways and parking lots that the Port of Entry occupies. The facility serves as a point of contact for travelers entering or leaving the country for the purposes of enforcement; prevention of illegal aliens from entering the country; collection of revenues; prevention of injurious plants, animal pests, human and animal diseases from entering the country; examination of export documents; registration of valuable articles being temporarily taken out of the country; and commercial transactions.

Located at land and inland water (river) boundaries with Canada and Mexico, land ports of entry have varying needs and requirements based on their location. For example, one land port of entry could be on a major shipping route and, therefore, process a high volume of commercial traffic and yet have virtually no pedestrian traffic. On the other hand, another land port of entry can process as many as 15,000 pedestrians each day. Beyond these obvious programmatic differences, the perceived threat at a land port of entry (e.g. terrorist and other illegal entry, drug smuggling, tax fraud, etc.) will have a significant impact on individual land port of entry design. 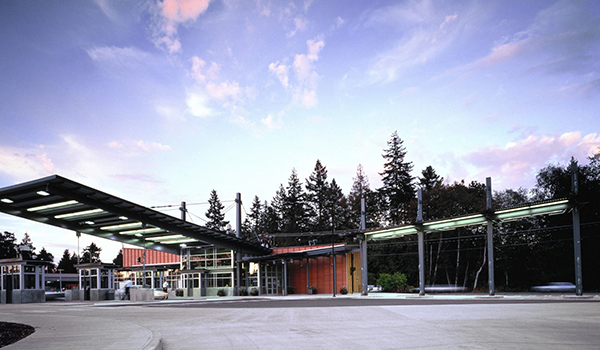 Point Roberts Port of Entry connects the communities of Point Roberts, Washington and Tsawwassen, British Columbia, on the Canada-U.S. border. This crossing serves as the only land link for residents of Point Roberts between their homes and the U.S. It is a peninsula that is connected only to Canada, making it a pene-exclave of the U.S. The crossing is the westernmost on the border in the contiguous United States.
Photo Credit: U.S. General Services Administration

Typically, the U.S. General Services Administration (GSA) or one of the Federal Inspection Agencies owns and operates these land ports of entry, although they may be leased to the government by municipalities, other local governments, or private entities such as toll bridges. GSA, through their Public Buildings Service, is typically responsible for border station facility development and management. For more information, contact the GSA Border Station Program.

A Land Port of Entry consists of a number of space types accommodating the functional needs of the primary federal inspection agencies that maintain staff on-site, including:

Generally, CBP, APHIS, and FDA conduct the primary and secondary inspections of goods and people seeking entry into the U.S. CBP processes the majority of the vehicular and pedestrian traffic at the station.

The U.S. Land Port of Entry Design Guide (For Official Use Only) details the types of spaces found in land ports of entry. These include:

With an appreciation of the fundamental differences between large and small ports of entry and facilities located on the northern or southern border, typical features of Land Ports of Entry include the list of applicable design objectives elements as outlined below. For a complete list and definitions of the design objectives within the context of whole building design, click on the titles below. 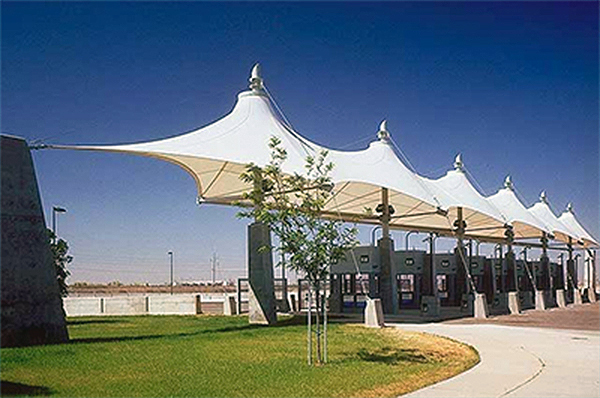 The Calexico East U.S. Land Port of Entry, in Calexico, California is a border crossing between the U.S. and Mexico. The facility is constructed of tent-like canopies and includes a bridge that crosses the All American Canal. It is a "Class A" service port with a full range of cargo processing functions.
Photo Credit: Robert Reck

Land Ports of Entry are typically federally owned or leased buildings, so they must comply with the ABA Accessibility Standards (ABAAS). Under ABAAS, all public use areas, common use areas, and employee areas must be accessible, and accessible routes must connect all accessible spaces.

A Land Port of Entry should be:

Be Planned, Designed, and Constructed with Scheduling and Phasing in Mind 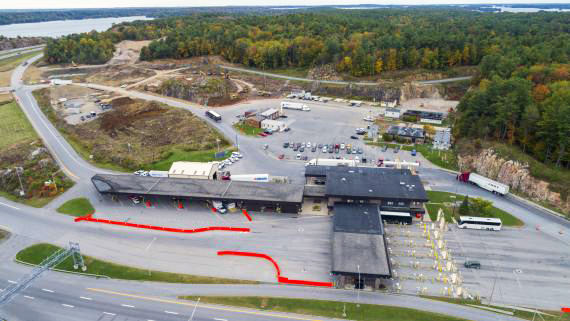 Processing more than 200,000 commercial vehicles and just over 590,000 passenger vehicles, the Alexandria Bay Land Port of Entry (LPOE), is the sixth busiest crossing for U.S.-bound commercial vehicles along the U.S. border with Canada. The facility is over 40 years old, so providing a modern facility is critical to complete the mission. There is an insufficient amount of queuing space for the traffic that passes through the LPOE and the tenants conduct more and different inspections than the original Port was designed to accommodate. These problems will be resolved in a two-phase $215 million construction project that will feature larger queuing and secondary inspection areas, more inspection lanes, and better-defined truck queuing and maneuvering areas in addition to many other enhancements. The existing roadways will be shifted, lengthened, or altered to accommodate the new port operations.
Photograph courtesy of Revette Studio for the U.S. General Services Administration 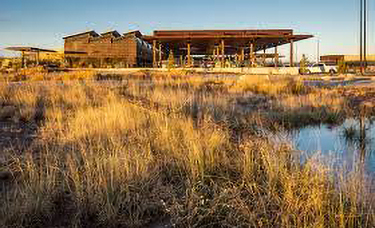 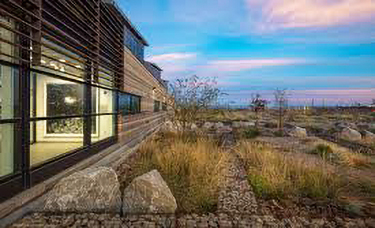 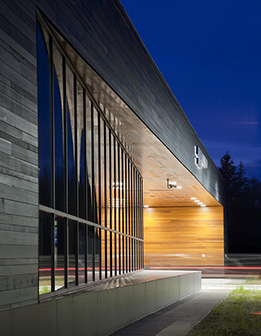 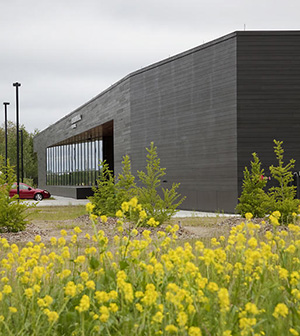 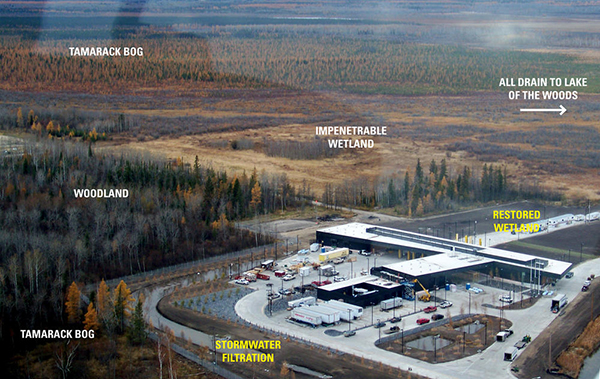 The Warroad Land Port of Entry is a 40,108-square-foot facility located along the Minnesota-Canadian border composed of three distinctly functioning buildings united by a continuous canopy that manages a complex set of operational issues including site circulation of commercial, private, and recreational vehicles, and state-of-the-art vehicle inspections. The 19-acre site is surrounded by and located in a wetland which was preserved and reconstructed to minimize the project's overall impact on the site ecology. Existing tree groves were considered in the orientation and placement of the buildings to minimize NW winter winds, and the buildings and canopy further created micro-climates to address the harsh winter climate. Restoration was achieved through native and/or adaptive plantings. Water filtration ponds capture site run off and utilize tall grasses, native sedges, and forbes that slow the flow of water and allow it to infiltrate the ground via a deep root system.
Photo Credits Top: Frank Ooms; Bottom: Julie Snow Architects, Inc.

CBP—One Face at the Border—U.S. Customs and Border Protection, Department of Homeland Security, established a frontline officer position, the CBP Officer, to serve at the Nation's ports of entry and provide the American public, travelers, and the international trade community with "one face at the border." The CBP Officer unifies and integrates the work of approximately 18,000 inspectors who came together from three different agencies (U.S. Customs Service [USCS], Immigration and Naturalization Service [INS], and Animal and Plant Health Inspection Service [APHIS]) when CBP was formed on March 1, 2003.

Prototype Port—A prototype port design was established for small ports, primarily located on the northern border. This small port design is intended to be site adapted at up to 50 small ports, significantly reducing the planning and design effort and project execution time for completing the construction program for small ports.

Updating Technologies—Modernizing U.S. Customs and Border Protection (CBP) automated systems and information technology is critical to the successful protection of the American people and the American economy in the 21st century. A number of programs utilizing technology to change inspection and enforcement processes include: 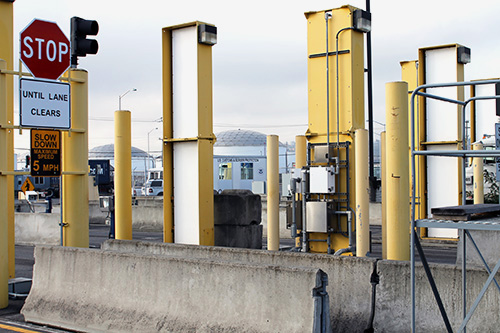 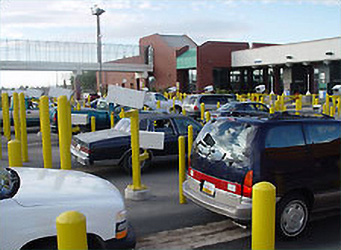 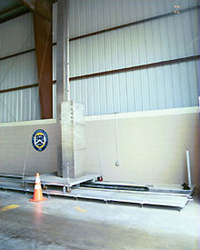 North American Free Trade Agreement (NAFTA)—resulted in the need for highway expansions leading to and from the border, truck safety, and cargo search enforcement facilities which must be located on or near the land ports of entry.

Through the 1995 U.S./Canada Shared Border Accord, the U.S. and Canada agreed to establish a joint approach to managing the common border. Former President Clinton's commitment to the accord changed the way land ports of entry are built along the U.S. / Canadian border.

All ports of entry must be designed in accordance with the U.S. Land Port of Entry Design Guide (For Official Use Only).

GSA owned land ports of entry must be designed in accordance with GSA PBS-P100 Facilities Standards for the Public Buildings Service.