The tragic human consequences of active shooter events now play out through the media to which the public is continuously connected. While this is definitely a real phenomenon that shakes the foundations of one's sense of security; panic and paranoia are not in order. After all, the chances of any specific individual being the victim of an active shooter are extremely small. People are more likely to die in a car accident while driving. However, the horror that the active shooter instills mandates that a person act. People want to feel safe, yet don't want to surrender their liberty and freedom. Schools, malls, and offices should not be turned into high security, hardened facilities. So what can prudently be done to reduce the chances of being a victim? A plan and training improve reaction time and reduce the chances that poor choices will be made under stress. Some selective hardening can help reduce the damage and number of victims if an event does occur. Delaying an attacker by mere seconds or minutes can save lives in an active shooter attack.

Protective design can reduce the risk of an active shooter incident and, if one occurs, can mitigate or reduce the number of potential victims. The extent of the design may vary greatly depending on the type of organization, the openness requirements of the facility, the actual or perceived threats, the tolerance for visible (perhaps intrusive) security measures, and funding. However, even for soft targets like schools, malls or office buildings, prudent steps can and should be considered. A facility, school, or office building should conduct a security risk assessment. Such an assessment can be performed by a qualified security consultant or company, or local law enforcement. Requiring credentials such as PSP (Certified Physical Security Professional) or CPP (Certified Protection Professional) by the American Society of Industrial Security (ASIS) or similar credential is a good way of ensuring a sound assessment is performed. The assessment should evaluate the threats, identify vulnerabilities to those threats, quantify the potential loses, evaluate the relative risks, and recommend measures to mitigate these risks. Such measures may be operational, technical, or architectural in nature. An independent party (not a vendor seeking to sell specific systems) will generally provide a more unbiased and comprehensive assessment.

When evaluating design considerations, the concept of CPTED (Crime Prevention through Environmental Design) is a good place to start. It is commonly described as a multi-disciplinary approach to deterring criminal behavior through environmental design. CPTED strategies rely upon the ability to influence offender decisions that precede criminal acts. It requires application of psychology as well as sound security design. CPTED includes common sense approaches of ensuring adequate lighting, eliminating hiding places, etc. that can improve security, reduce vulnerability, and help deter criminal activity.

As evidenced by the statistics, many active shooters are set on destruction, and their own mortality is not a concern. They never intend to get out of the assault alive. This can limit the value of deterrence. However, many active shooters, especially those who plan their actions carefully, want their plans to succeed. Even suicide bombers have been known to avoid certain targets because they fear they'll be stopped or interdicted prior to completing their mission. A robust security posture and presence can certainly help in this regard. For lightly protected facilities like schools, malls, and office buildings, this may be limited to such things as visible signage, random guard patrols, adequate lighting of exterior parking and entrance areas, closed circuit television (CCTV) cameras, substantial exterior door locks, simple access control systems (turnstiles, badges, etc.), and secure locking doors to key areas or passageways.

Installing and maintaining a CCTV system can function as a deterrent (prevent the attacker from attacking due to the visible presence of cameras), as a detection capability (motion activated or otherwise monitored screens will provide early detection and observation of an attack), and as part of the response capability (cameras can show law enforcement the location of the attacker and victims and their activities in the facility). In some facilities, it may also be possible to introduce the ability to control or lock down parts of the facility. This may include turning elevators off/on remotely, or locking or unlocking hallway doors from a central command station. Coupled with CCTV or other technology this may be an effective way to control or guide the movement of an assailant during an attack. Safe rooms and duress alarms can be built into new facilities or added as retrofits to existing buildings. There are a wide range of possible design features coupled with security systems available to improve the security posture of even lightly protected facilities. All of these measures can provide some level of deterrence.

Early detection of an active shooter generally relies on such measures as behavior-based surveillance (i.e., is a person acting oddly, dressed oddly, out of place, etc.). This can be accomplished by students, teachers, office workers, shoppers, in fact anyone. Aside from the professional security guards however, this requires society as a whole to build that "see something, say something" mentality and for people to be generally aware of their surroundings. In addition, simple measures such as requiring visitors to sign in and get a badge, not only helps identify people as visitors but it provides an excellent choke point to observe those entering a facility.

This function can be performed by greeters at the doors of retail establishments, office staff, or formal security guards in uniform. While there is a vast array of intrusion detection systems available today, people's eyes and ears tend to be the most reliable especially in an open, non-hardened publicly accessible facility. As a minimum, however, solid security locks and doors are essential. These may be coupled with sensors to detect motion or unauthorized access. If they are to be more than just a deterrent and delay device, these sensors should also tie back to a central reporting station for interpretation and action.

Alarms are essential and must go beyond the basic school fire alarms used in the past. Studies conducted on the evacuation of large public facilities have clearly shown that the efficiency of large scale evacuations are increased substantially when audible alarms giving simple verbal directions are provided compared to a general klaxon-type alarm. This is especially so in an active shooter situation where specific directions to staff or occupants may improve survivability. If for example the shooter is located in the cafeteria of the building, it would be beneficial to direct people away from that area. Additional measures for warning should include messages to employee computers, text messages, email, etc.

Since most active shooter events generally last only minutes, access denial can be an effective way to mitigate potential losses. Slowing or delaying an aggressor by just a minute or seconds may give law enforcement time to arrive before mass casualties are incurred.

For lightly secured facilities, a significant return on investment can generally be obtained by implementing reinforced doors lockable from the interior of office spaces, gathering areas, or retail outlets. Secondary door blocking devices such as a simple rubber or wood triangular stop can provide additional stopping resistance. Those doors should have small slit windows, too small for an aggressor to crawl through. No windows would be preferred but may not be practical for other reasons. It is important however that if windows are present that they contain laminated glass that provides some resistance to ballistics attack and forced entry. If a gunman can shoot through the window it is important that he can not merely reach in and unlock the door. This is where simple door stops or floor angles can provide needed secondary protection. Analysis of footage from actual active shooter events have shown that the shooter will likely not spend significant time trying to get through a particular door if it is locked or blocked. Rather they move to their next target. They know law enforcement is on its way and that time is limited.

The technology and materials to provide blast, hurricane, forced entry, and ballistic-resistant door and window systems exist. These systems have been designed, tested, and implemented in highly secure facilities like embassies, courthouses, government buildings, military facilities, sensitive data centers, and facilities housing, historic or otherwise valuable assets, for many years. Providing this level of protection in more lightly secured facilities like schools, malls and typical office buildings is often not practical, cost-effective, or even desired by the occupants given the level of threats and risks perceived. However, some level of protective glazing, especially for windows and doors near lobbies and other entrances offer a potential area where simple improvements can provide significant benefit. In the Sandy Hook School shooting for example, it was reported that the shooter failed to gain entry through locked doors and shot out adjacent windows. This is shown in Figures 1 and 2. 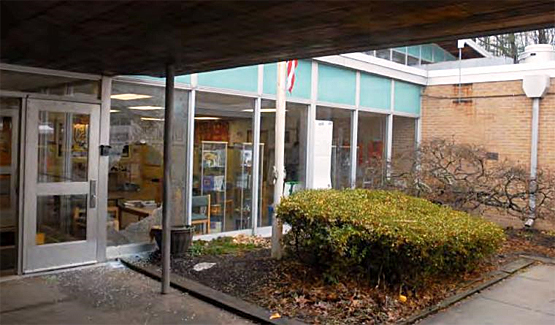 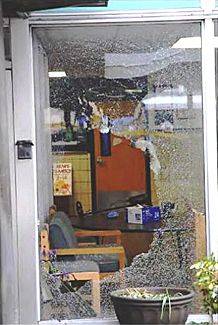 Test data collected in projects supporting the Department of Homeland Security (DHS) and the U.S. General Services Administration have clearly demonstrated that some applications of properly installed security window films and thin laminated glass systems can provide resistance to forced entry even though they were not specifically designed for that purpose.1 These tests were conducted in response to the U.S. Government's concern that upgraded window systems in their facilities designed to resist hurricane wind and explosive blast forces might hinder first responders in gaining access to or emergency egress from protected spaces. This body of data was made freely available to firefighters resulting in over 5,000 trained first responders (Figure 3). The test program produced a window classification system to train firefighters how to enter and egress through such window systems. The classification system is shown in Table 1. The data should now be extended, analyzed, and made available as a resource for facility owners and security designers for the purposes of evaluating the benefits of lightly protected glazing systems.

Table 1. Window classification system developed for the U.S. General Services Administration and the U.S. Department of Homeland Security. The system classifies window systems based on the type of tools required to breach the glazed system in a given period of time.

Just as potential victims must process through an OODA Loop where they Observe, Orient, Decide, and Act, so must the active shooter. When an aggressor hits a window system for example, expecting it to easily break and it doesn't, this disrupts their processing of events. They have to make decisions. Do they continue to attack to break through? Do they change course and approach by a different route? If they start trying to break through such a window system that may take a minute or two to get through, do they continue or do they give up? Regardless of the outcome, such systems can provide disruption and delay. Perhaps enough time for escape and for law enforcement to arrive. Remember, seconds or minutes can make a tremendous difference in an active shooter event.

Designing for an active shooter event can be performed in virtually any environment and to varying degrees. Schools are the current focus of resources for mitigation measures due to the perceived high frequency of events and the natural reaction to protect our children from harm. Government and commercial entities are also beginning to focus on active shooter design, particularly at points of public interface such as lobbies.

The lack of guidance documents focusing specifically on active shooter designs will likely lead to varying levels of implementation and reliance on methods and technologies which may not be as effective or cost efficient.

Applicable to all building types.

Applicable to all space types.