All facilities face a certain level of risk associated with various threats. These threats may be the result of natural events, accidents, or intentional acts to cause harm. Regardless of the nature of the threat, facility owners have a responsibility to limit or manage risks from these threats to the extent possible. The federal government has implemented The Risk Management Process for Federal Facilities: An Interagency Security Committee Standard which states,

"Risk is a function of the values of threat, consequence, and vulnerability. The objective of risk management is to create a level of protection that mitigates vulnerabilities to threats and the potential consequences, thereby reducing risk to an acceptable level. A variety of mathematical models are available to calculate risk and to illustrate the impact of increasing protective measures on the risk equation."

Facility owners, particularly owners of public facilities, should develop and implement a security risk management methodology which adheres to the Interagency Security Committee (ISC) standard while also supporting the security needs of the organization. Landlords who desire to lease space to federal government agencies should implement the ISC standard in the design of new facilities and/or the renovation of existing facilities. 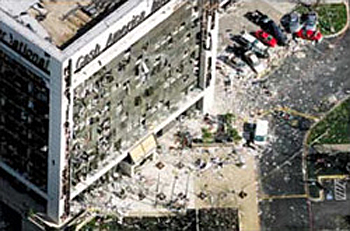 The first step in a risk management program is a threat assessment. A threat assessment considers the full spectrum of threats (i.e., natural, criminal, terrorist, accidental, etc.) for a given facility/location. The ISC standard only addresses man-made threats, but individual agencies are free to expand upon the threats they consider. The assessment should examine supporting information to evaluate the relative likelihood of occurrence for each threat. For natural threats, historical data concerning frequency of occurrence for given natural disasters such as tornadoes, hurricanes, floods, fire, or earthquakes can be used to determine the credibility of the given threat. For criminal threats, the crime rates in the surrounding area provide a good indicator of the type of criminal activity that may threaten the facility. In addition, the type of assets and/or activity located in the facility may also increase the target attractiveness in the eyes of the aggressor. The type of assets and/or activity located in the facility will also relate directly to the likelihood of various types of accidents. For example, a facility that utilizes heavy industrial machinery will be at higher risk for serious or life-threatening job related accidents than a typical office building.

For terrorist threats, the attractiveness of the facility as a target is a primary consideration. In addition, the type of terrorist act may vary based on the potential adversary and the method of attack most likely to be successful for a given scenario. For example, a terrorist wishing to strike against the federal government may be more likely to attack a large federal building than to attack a multi-tenant office building containing a large number of commercial tenants and a few government tenants. However, if security at the large federal building makes mounting a successful attack too difficult, the terrorist may be diverted to a nearby facility that may not be as attractive from an occupancy perspective, but has a higher probability of success due to the absence of adequate security. In general, the likelihood of terrorist attacks cannot be quantified statistically since terrorism is, by its very nature random. Specific definitions are important to quantify the level of each threat. The more specific the definition, the more consistent the assessments will be especially if the assessments are being performed by a large number of assessors. Example assessments are provided below:

Vulnerability is defined to be a combination of the attractiveness of a facility as a target and the level of deterrence and/or defense provided by the existing countermeasures. Target attractiveness is a measure of the asset or facility in the eyes of an aggressor and is influenced by the function and/or symbolic importance of the facility. Sample definitions for vulnerability ratings are as follows:

The vulnerability assessment may also include detailed analysis of the potential impact of loss from an explosive, chemical or biological attack. Professionals with specific training and experience in these areas are required to perform these detailed analyses. A sample of the type of output that can be generated by a detailed explosive analysis is shown in Figure 2. This graphic representation of the potential damage to a facility from an explosive attack allows a building owner to quickly interpret the results of the analysis. In addition, similar representations can be used to depict the response of an upgraded facility to the same explosive threat. This allows a building owner to interpret the potential benefit that can be achieved by implementing various structural upgrades to the building frame, wall, roof and/or windows. The results of blast assessment depicted in Figure 2 were for glazing only.

A combination of the impact of loss rating and the vulnerability rating can be used to evaluate the potential risk to the facility from a given threat. A sample risk matrix is depicted in Table 1. High risks are designated by the red cells, moderate risks by the yellow cells, and low risks by the green cells.

The ratings in the matrix can be interpreted using the explanation shown in Table 2.

Table 2. Interpretation of the risk ratings 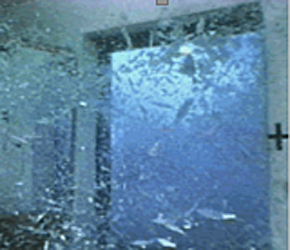 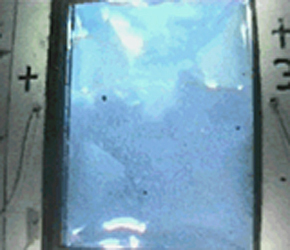 The implementation of the recommended security and/or structural upgrades should have a positive effect on the impact of loss and/or the vulnerability ratings for each threat. The final step in the process is to re-evaluate these two ratings for each threat in light of the recommended upgrades. Using an exterior explosive threat as an example, the installation of window retrofits (i.e., security window film, laminated glass, etc.) will not prevent the explosive attack from occurring, but it should reduce the impact of loss/injury caused by hazardous flying glass. Therefore, the impact of loss rating for an explosive threat would improve, but the vulnerability rating would stay the same. A second example could be introduction of an explosive into the interior of the facility. The potential upgrade for this threat might be X-ray package screening for every package entering the facility. While the potential impact of loss from an internal detonation remains the same, the vulnerability to an attack is lessened because a package containing explosives should be detected prior to entering the facility. To further reduce risk, structural hardening of the package screening areas could also reduce potential impact of loss. Reduction of either the impact of loss rating or the vulnerability rating has a positive effect on the reduction of overall risk.

The overall threat/vulnerability and risk analysis methodology is summarized by the following flowchart. 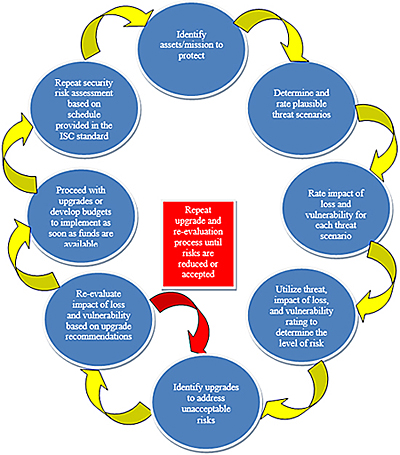 Threat/vulnerability assessments and risk analysis can be applied to any facility and/or organization. The federal government has been utilizing varying types of assessments and analyses for many years. Federal Security Risk Management (FSRM) is basically the process described in this paper. FSRM is currently being used by several federal agencies as well as commercial businesses to assess their facilities.

Software is available to assist in performing threat/vulnerability assessments and risk analyses. The software tool associated with implementation of FSRM is entitled FSR-Manager. This tool is designed to be used by security personnel and allows the user to:

FSR-Manager uses the above inputs to: