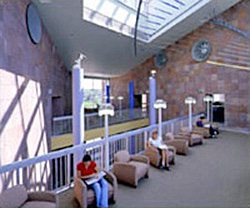 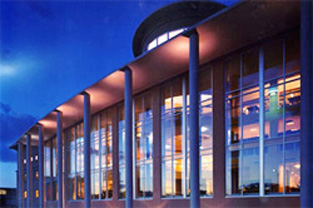 There are many broad types of academic library space:

According to the Association of College and Research Libraries' (ACRL) Standards for College Libraries 2000 Edition, "the library facility should be well planned; it should provide secure and adequate space, conducive to study and research with suitable environmental conditions for its services, personnel, resources, and collections. This library's equipment should be adequate and functional." ACRL provides the following list of questions to answer when developing the academic library program: 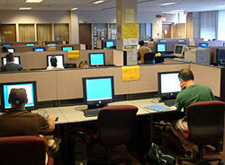 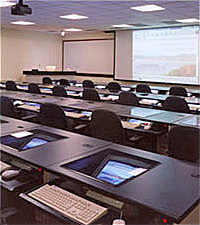 In addition to the emerging issues of sustainable design and wiring technology to accommodate modern communications (see Public Libraries: Emerging Issues), digital media, and the space required to accommodate it, is experiencing rapid growth. Digital media resources come in many forms including Internet delivery and satellite technology. Some of the program considerations for media resources in academic libraries as noted in the Association of College and Research Libraries' "Guidelines for Media Resources in Academic Libraries" are as follows:

Increasingly, academic curricula are based on collaborative and group projects. As a result, there is less and less emphasis on traditional, individual study settings, such as long rows of individual study carrels. Instead, academic libraries are developing learning centers, which provide group study rooms and settings, well-supported by access to electronic information resources, hardware tools, and associated productivity software. See also WBDG Productive—Design for the Changing Workplace and Productive—Integrate Technological Tools for flexible design concepts, which are applicable to academic libraries.

Some academic libraries are also implementing wireless communications technologies to allow library staff members to roam through the stacks and reader seating, without being bound to a reference desk, the better to provide support to patrons at the point of contact.

Model Building Codes that may apply include the following (check with local building departments for code requirements):

Also note that the American Library Association, Building and Equipment Section has published a guide to recommended space allocations for furnishings, equipment, and resources to be housed in the library: