Poor indoor air quality (IAQ) is a major environmental health hazard which has grown worse as building owners have tried to tighten the building envelope to save on energy. While various air purifying techniques are utilized, all suffer from one shortcoming or another, leaving ventilation as the main way to deal with it. However ventilation causes heavy energy use as exchange air is conditioned and it brings outdoor pollutants indoors. In the early 1980s NASA was exploring a method of air purification for long-term habitat in outer space, where ventilation could not be used. They devised a system of air purification, called phytofilter technology, which uses plants and root microbes to digest contaminants. This method successfully deals with particulate matter, biologicals, chemicals or VOCs, odors, and ionizing radiation. When applied in buildings it results in an 80% reduction in ventilation needs and can save a third on heating energy usage. Further it utilizes a series of different technologies where the shortcomings of one are compensated for with another. The system is very simple, very inexpensive and has great potential for lessening our carbon footprint. Plus it can add up to 39 LEED points to a project.

A phytofilter is a plant filter ("phyto" being the Greek word for plant) which removes airborne contaminants from indoor air. It is composed of: 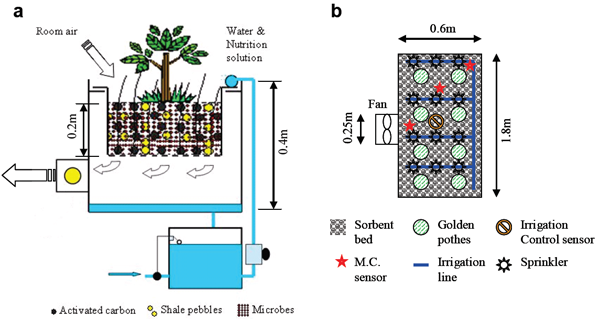 Utilized for air purification, polluted air is propelled through the filter, which strips out the contaminants; after which the plant(s) and root microbes digest them (bio-regenerating the filter at the same time so it never needs replacement).

This device is not given to mold growth because the materials used in the filter do not support it and because the root microbes actually digest mold spores.

Phytofilters often have a reservoir so water may be used over and over to re-moisten the filter and so economize on water use. They are exceedingly inexpensive to construct and allow more than a hundred times more contaminated air to come in contact with the root microbes than if a plant were grown in natural soil, thus significantly saving on space. Further, the root microbes which digest these contaminants multiply according to their food supply, which are the contaminants themselves and they mutate quickly so as to adapt to whatever those specific contaminants are. Plus they are not harmful to man.

These systems combine many different technologies because airborne contamination are of many different types—particulate matter, biologicals, chemicals, odors and ionizing radiation and no one method takes care of them all. Further, by using different technologies, the shortcomings of one are overcome by the next, which allows the system to make use of other air purification methods not commonly used indoors. As a result, phytofilters remove all types of airborne contaminants and even radon and low level nuclear radiation, which come from nuclear power plants. Such systems are truly unique in what they do.

Below is a chart which shows the present shortcomings of each method of air purification now being used for the treating of indoor air.

Table I: SUMMARY OF AIR-CLEANING TECHNOLOGIES

Alternative methods of air purification not commonly used to clean indoor air, along with their shortcomings are outlined below.

Courtesy of The Phytofilter Technologies Institute.

The table below shows a phytofilter's many advantages.

Courtesy of The Phytofilter Technologies Institute. 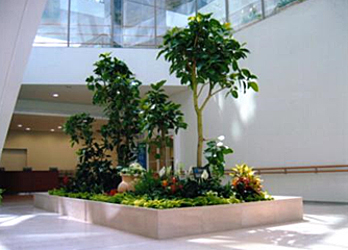 The Characteristics of a Phytofilter

Phytofilters add to the beauty of a building.

Phytofilters are low cost solutions, eligible for utility rebates and low interest loans where energy savings alone can pay them off. Plus they provide for a monthly positive carry. They provide for enhanced tax deductions, increase the value of the building, and are even able to contribute up to 39 LEED points on a project. The result is that now even a marginal project can receive LEED certification, while others, which before would have only obtained LEED certification, now can qualify for Silver, Gold or Platinum status. They decrease vacancy factors, and hold out the opportunity for lower sized HVAC equipment. They provide energy savings and offer a payback in 6-1/2 years from such savings alone. But because they also reduce health costs of employees and add markedly to productivity, their actual payback may occur in just a few months (especially since they often cost as little as $1.00 per square foot of habitable space serviced

Phytofilters allow a building to operate or function as it was meant to by effectively providing high quality indoor air. Plus they enhance flexibility and adaptability of the space within, since the microbes in the filter bed mutate quickly, and allow for new and different contaminants to be digested or contained in the indoor environment, which might occur if use were altered. These systems are self-watering, have a bio-regenerating filter bed, which means they never have to be replaced, and employ slow growing plants which reduce maintenance needs. They markedly remove dust from the indoor environment, which reduces daily cleaning time of the premises. And because they offer a multitude of placement possibilities, they allow quick adaptation of the space for optimum use.

Phytofilters allow for the least amount of change to a building's historic design and original architectural fabric, given where they can be placed, and because they only take up a small part of that space, with one foot of filter being able to accommodate 435 square feet of habitable space and one plant being able to service 550 square feet.

Phytofilters promote health and well-being. They can reduce or eliminate disease and discomfort, and are able to take care of all types of airborne contaminants. This results in fewer sick days, lower disability and worker turnover, and a desire on the part of workers to be in the workplace where they are employed. Poor indoor air quality is often a major complaint of building inhabitants, and these systems all but eradicate it, even eliminating many of the triggers which give rise to asthma, allergies, and hay fever, which almost 20% of the population suffers from. In fact better quality air has been shown to increase worker productivity  by up to 10%. Also people prefer to be in an environment where plants are used as they decrease stress and make for a more harmonious environment. Phytofilters also increase thermal comfort and deal with excessive dryness in buildings, especially in winter, without the worry of mold.

Phytofilters reduce threats as they reduce ventilation requirements by more than 80% so intake air vents can be made smaller and more secure. Plus they can deal with chemical and biological threats since the filters actually digest these types of airborne contaminants. Given that almost all buildings in the United States have unsafe levels of VOCs, particularly formaldehyde and many have unsafe levels of radon, which these systems take care of, they make buildings safer for their inhabitants. In addition, if hazards were to occur, such as a prolonged electrical blackout and the building were unusable for any length of time, or temperature were to drop, resulting in the killing of the plants in the filter, the unit can function for 6 months or more without plant replacement since the plants only bio-regenerate the filter bed.

Phytofilters enhance sustainability because they save on energy, a third on heating, and 11–16% on heating and cooling combined. This is due to their ability to reduce ventilation by more than 80% and add moisture to dry air in winter, which allows for a lower thermostat level. The graph below, provided by ASHRAE, shows how when more relative humidity is added to air, temperature can be lowered and inhabitants can still be kept comfortable, especially in winter. 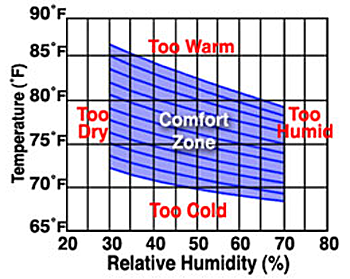 Plus these systems save on water because they can: make use of rain water for the filter and use moisture condensation from a cooling tower or cooling coil; and because they have a reservoir for reuse of water to re-moisturize that filter. Thus they increase water efficiency; also they enhance indoor environmental quality by removing all types of different contaminants, in the air, which they digest and transform into plant food which the plants in the filter use as plant food. Plus they even deal with off-gassing of VOCs, including formaldehyde, a well known carcinogen, from which almost all buildings suffer, so materials that contain harmful ingredients can be utilized in construction which might be longer lasting. They also allow for smaller sized HVAC equipment resulting in less material and energy used in HVAC construction; and eliminate the need for replacement filters because the filter within a phytofilter bio-regenerates itself  so saving on additional material in making replacement filters, energy use in their manufacture, and landfill use when dealing with their disposal.

With increased world concern about global warming and with countries struggling to reduce carbon emissions, this technology adds to the tools available for dealing with the problem. Because of the system's high energy savings capabilities in both heating and cooling, it should quickly gain in acceptance once installed in showcase buildings.

Also a 1.5 credit LU/HSW AIA CES Course has been approved on the subject entitled "An Alternative to Mass Ventilation First Discovered by NASA" with a copy of the presentation deck provided.

This self-explanatory deck is helpful to anyone who wants to understand how phytofilters improve inhabitant comfort and lessen disease. Plus it talks about the different contaminants in poor indoor quality air in depth, how up-front costs of installation of such a system can be provided for by many government programs, how the number of LEED credits a project can obtain can be increased, and how phytofilter technology was first discovered by NASA.

ASHRAE and other building codes demand proper ventilation. ASHRAE has an IAQ procedure which will allow for the phytofilter system to be installed with a smaller sized HVAC system or a phytofilter system can be installed with regular sized HVAC equipment and employed with reduced rates of ventilation, so allowing a building to revert to regular ventilation levels were the system to ever breakdown.