Aircraft hangars are commonly referred to as "glorified garages" for airplanes. They can vary from simple "shade" structures that protect all or parts of the aircraft from the elements to complicated environmentally controlled maintenance facilities in which robots apply radar absorbing coatings. However, since planes are designed to fly, it is essential to minimize their maintenance time in the hangar and maximize their availability to fly.

The Armed Services have developed definitive designs for hangar facilities to house and maintain their aircraft. Many of these definitive designs are shown in UFC 4-211-01N Aircraft Maintenance Hangars: Type I, Type II and Type III. Much of the criteria for the design comes from AFM 32-1084 Facility Requirements.

In the commercial aircraft sector the designer needs to rely on Facility and Planning Criteria that are issued by the aircraft manufacturers for their aircraft or a third party compilation of data. For example, the Boeing aircraft characteristics can be found on the company's website. The designer must follow local building codes and integrate the characteristics of all possible aircraft that can populate the hangar to develop the space requirements for the intended use of the hangar.

There are five types of spaces in hangar facilities:

Careful analysis of the following will allow designer to determine the space needs for general spaces listed above common to aircraft hangars. 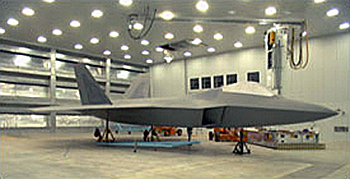 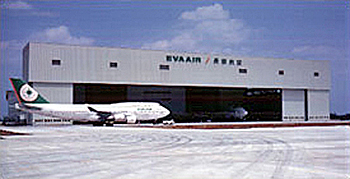 Step 1: Determine the types and number of aircraft which populate the hangar.

During this initial stage, input is needed from the hangar's future owner about his aircraft fleet. Information such as the following:

Step 2: Determine the Maintenance Function of the Hangar Facility.

Input is needed from the owner with regards to the maintenance that will be performed on the aircraft in the hangar. This can vary from no maintenance at all to complete overhaul of the aircraft. Different levels of maintenance are required by the Federal Aviation Administration for certain aircraft currently in operation.

Some references to obtain physical characteristics and maintenance requirements of aircraft are as follows: 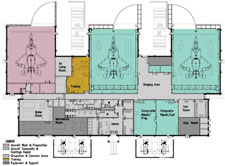 When sizing the hangar space, do not overlook tail heights, the height and width of the hangar door openings, the structural depth of columns and trusses and the turning radius of tow vehicles connected to aircraft. Also in larger hangars, distance to means of egress become a concern and should be laid out to meet local codes and NFPA 101: Life Safety Code.

Step 5: Determine space needs for the Maintenance Shops and Warehouse

The Federal Aviation Administration mandates procedures to be followed by operators when establishing aircraft inspection intervals and overhaul times.

The space needs in the Office/Administration area are similar to those required in any office building. The general rule of thumb according to Office Finder is 175 to 250 square feet of useable space per person. 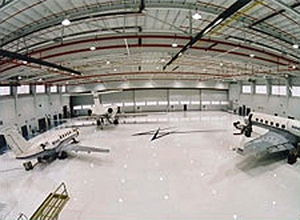 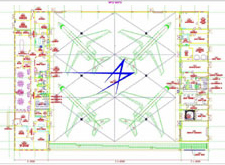 In general, the hangar space usually requires fire protection using water mixed with an Aqueous Film Forming Foam (AFFF). This can be applied by an overhead system or water cannons mounted near the floor. If the existing fire water pressure isn't adequate, the fire protection system may require a reservoir and booster pumps to satisfy the demand of the hangar space. The National Fire Protection Association standard, NFPA 409: Standard on Aircraft Hangars establishes fire protection criteria for hangars based on their size and construction type. Another resource is the owner's insurance carrier who should have input into the fire protection and detection systems.

The electrical requirements of the hangar facility should meet the requirements of NFPA 70: National Electrical Code®. The hangar space should be classified as hazardous or nonhazardous according to NFPA 70 and the electrical installations designed accordingly. Electrical equipment in the hangar space should be waterproof, NEMA Type 4 (minimum rating) when deluge sprinkler protection is provided. Various power supply voltages and frequencies are required in the facility because Aircraft and Ground Support Equipment operate on different voltages and frequencies than normally provided by the public utilities.

One of the largest single design elements to be selected is the type of hangar door to be utilized. There are several different types (sliding, vertical lift, bifolding, fabric, etc) and each type has advantages and design implications for the overall structure. 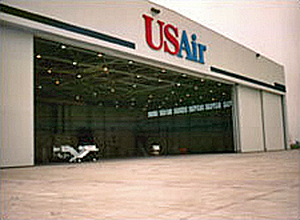 Sustainable design should be incorporated into every building design so the building can perform efficiently without wasting energy during its lifetime. The hangar area is particularly susceptible to heat loss as the hangar doors are opened for aircraft movement.

The next generation of aircraft is larger and heavier than current aircraft that will make many existing hangar facilities obsolete. For a primer see Burns & McDonnell's Special Report to the Airline Industry, How Will New Large Aircraft Affect Your Airport Facilities .

The aviation industry is a high profile industry and is a target for terrorist attacks. Future building designs will incorporate higher levels of security and force protection/anti-terrorism standards.