A rapid increase in opportunities to plan, design, and construct corporate and academic projects with a focus on science and technology are occurring in developing countries throughout the Middle East and Asia. Countries such as China, India, Singapore, and Saudi Arabia have had underdeveloped infrastructure, and are now growing at much higher rates than developed countries. Just recently during the 2008 Olympics, the world was able to see the significant development that has been occurring in China for at least the last ten years. Many articles and books have been written about these phenomena, most notably Thomas Friedman's books "The World is Flat" and "Hot, Flat, And Crowded." Most of this literature focused on the growth and competitiveness that has evolved around the world and is continuing to develop at a record pace. These developing countries can benefit from the lessons learned over the last fifty years in Europe and North America, and their opportunities lie in advancing technology, which should be a priority globally. 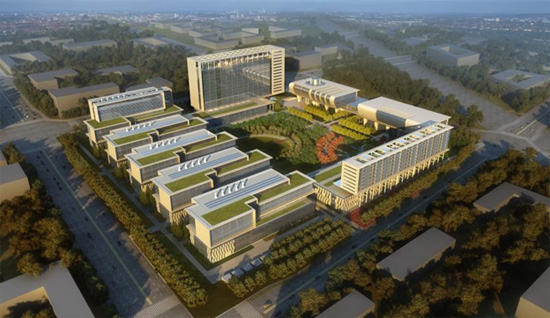 HuaNeng Research Campus located in Beijing, to the north near sixth ring road is approximately 300,000 gsm under construction with over half the space programmed for research.

Knowledge and Research for the Global Good

Research is being conducted at a very high level around the world. Initially, developing countries were focusing on basic science and technology research. However, as they mature, these countries are choosing additional areas of focus to differentiate their capabilities. For example, Singapore is focusing on biological sciences research, with an emphasis on stem cell and cancer research. China is addressing sustainable technology and renewable energy research. Knowledge and research is usually for the global good and therefore any research discovery anywhere can help all people everywhere. Fewer regulations in many developing countries have the potential of accelerating these research discoveries.

Basic science research discoveries, inventions, and better education have already led to increased life expectancy. At the beginning of the 19th century the average life expectancy was approximately 24 years. At the beginning of the 21st century for developed countries the life expectancy has increased to 78 years, an average increase of three months a year steadily over the past 200 years. Some key research discoveries from 1800 to 2000 include the first vaccination (1796), first blood transfusion (1818), anesthetics developed (1847), X-rays (1895), first drug was aspirin (1898), penicillin (1928), computer (1938), vaccines for polio, tuberculosis, mumps and rubella (1952), and the MRI was developed (1977). 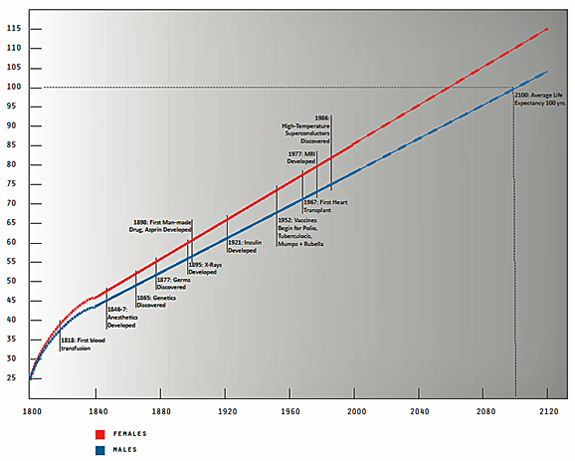 If the average life expectancy continues to increase at the same rate then by the beginning of the 22nd century people will be averaging 100 years of age and older! Currently, the average life expectancy is 20 to 30 years less in developing countries. The hope and expectation is that during the 21st century the developing countries will have improved to live as long as those in developed countries. This could happen by continued education within their countries, further global partnerships, economic growth, as well as new research discoveries. Organizations like the Bill and Melinda Gates Foundation are already having a very positive impact in supporting many developing countries.

Domestic research institutions in the U.S. have the opportunity to learn from what is expected to be international success stories. Moving forward, it will be important that the U.S. becomes more efficient and innovative to have a chance to keep up with change and global competition.

The following are key ideas and differences for international projects today compared to those in the U.S.:

Without being bogged down with layers of hierarchy, the governments and companies of developing international countries can make decisions faster and implement them very quickly, thus building team leaders are able to make decisions more rapidly.

The clients in these developing countries are not burdened much with internal politics, out of date standards, or people who are making the same decisions they have for decades. In the U.S. we see more expensive buildings because of requirements by health and safety people, various code officials, local municipalities and vested interested groups. Each group requires something, which usually means more cost and complications. Simply too many review agencies and individual people have say on specific issues but have very little interest in the overall success of the project.

2. Greater Need to Build New Structures of Many Types

Developing campus master plans and designing several buildings at one time create ideal solutions for the long term. There is no burden for working on existing campuses that have significant limitations and growth problems as seen in the U.S. and Europe. As soon as decisions are finalized and funded overseas, the projects are expected to be built as soon as possible. A prime example is the Princess Noura University in Riyadh. It has taken Princess Noura University less than five years to go from just desert to finished construction and one of the largest academic campuses in the region and possibly the world.

Professionals with existing campuses should step back and look for a way, over possibly a 25 year period of time to create an ideal master plan by removing some inefficient structures and strategically adding new space that will add value to the existing master plan. 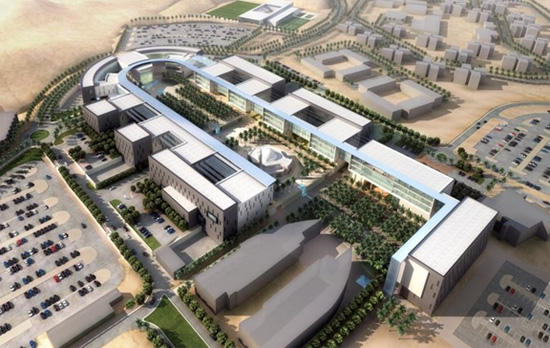 Medical School in Jeddah, Saudi Arabia for KSAU is in construction is planned to connect all program spaces at all levels across the campus.

Many of these developing countries do not have a deep supply chain of materials, which improves efficiencies as supplies are delivered on a daily basis. In these countries, they do not use expensive buildings to store more than seven days of supplies. Additionally, storage happens in facilities in close vicinity to the main buildings. For example, universities in the Middle East and Asia have a separate campus nearby which are basically several warehouse buildings. In contrast, the U.S. uses much space for unnecessary and inefficient storage. U.S. universities, for example, have separate funding for construction and operations. Cost is not addressed in a holistic manner, like it is in many developing countries. "Just in Time" management of supplies is clearly a better business model.

The developing country facilities are much more cost-effective to run, support safer buildings, and the supplies are delivered within seven days in most cases based on requests. The U.S. and Europe should consider a similar model and find ways to be much more cost-effective in the use of expensive buildings and providing supplies in a timely manner as it will be a significant shift and potentially contribute to large savings.

In the U.S. many recently designed laboratory buildings are very efficient in plan. To improve the overall building efficiency decision makers need to be re-evaluating the volume of their spaces. Less space for storage in the laboratory and more space for research is the way to go. 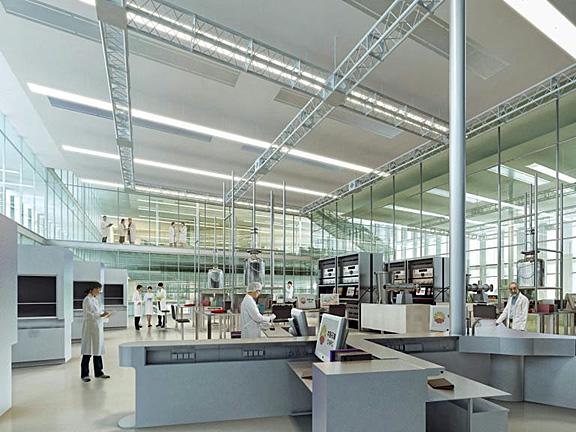 PetroChina, the largest petroleum company in the world, is constructing their new research park with laboratories that are open and focused on collaboration with minimal space for storage.

4. Utilizing Sustainability as a Baseline

International projects for developing countries have the opportunity to utilize the sustainable initiatives developed by the U.S. and Europe as their baselines in building new facilities and they should look for greater energy efficient solutions and expect their staffs to run them in such an effective manner.

Developing countries can utilize sustainability as the baseline for development. They are able to take on new sustainable initiatives being developed because they do not have the infrastructure to run their facilities. The sustainable design starts at the campus and sometimes town scale then continues throughout all aspects of the community and building development. 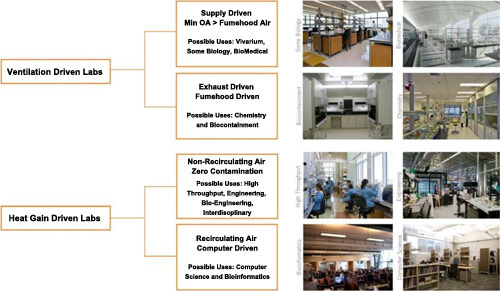 The culture of China in many ways supports sustainable design. The building codes require only 64F degrees in the winter and 76F degrees in the summertime (most U.S. businesses run their facilities between 68–74 degrees). Most buildings and spaces in China are naturally ventilated which during the spring and summer can reduce the heating and cooling costs. One potential problem is that labs with heavy chemistry and biology needs should not have operable windows to protect the research and researchers. Hopefully, over the next few years labs in China will be sealed for safety based on the type of research being done in that space. Much research is equipment driven, and also computer driven. These labs are typically called dry labs that, in most cases, operable windows are acceptable.

Key sustainable trends to focus on include:

Sustainable Operational Procedures that the end users are responsible for following that support saving energy and reducing operational costs.

There has been a significant amount of change that has occurred in the past ten years primarily in the U.S. and Europe to utilize the computer more for 3D simulation, data crunching, and to allow meetings to occur in real time around the world on flat screens. Many of the best researchers have teams in multiple locations around the world to capitalize on funding, expertize, and focus within a country, company, or campus.

Many developing countries are, at times, working with some older research models with heavy usage of chemicals. Many people believe the amount of chemicals necessary to conduct research will decrease around the world.

Virtual spaces are now evolving where a person can be sitting in a lab in Europe and talk to their research team as they get a cup of coffee in the break room in China. Speed to market is getting more difficult each year with most institutions working faster than ever.

To maintain that competitive edge, the U.S. and Europe needs to think out of the box to make timely big picture decisions, use its current infrastructure more effectively, become more efficient and less wasteful, and look at sustainable models in cities, buildings as better business models.

The U.S. and Europe have had the luxury of growing abroad with multi-national companies and universities that have very strong global brand recognition. We will start to see companies from developing countries evolve and be very competitive in most areas of the world as well. Those countries will be expanding their brand around the world over the next twenty years, like what Europe and the U.S. have done over the past twenty years. The best ideas and professionals are anywhere and everywhere. Keeping up with change and innovation may be the most difficult aspect of our work in the 21st century.

While the growth clearly will be happening much more in developing countries, this growth of innovation in research and the knowledge industry can benefit the entire world.