Design strategies that not only increase robustness but also facilitate incorporation of resourcefulness and planning for recovery and warranted redundancy should be implemented. In some cases these strategies are simply achieved through effective configuration and use of site and building features. In other cases, more extensive additions of systems are required.

Resilience is a strategy to enhance the ability of a building, facility, or community to both prevent damage and to recover from damage. Each building has some particular function for which it is designed. Each function, each particular tenant, has a set of requirements and support systems necessary for that function. Attention should be paid to those particular needs in arriving at the specific resilience strategy and design. Achieving resilience for tenants will involve a combination of physical characteristics of the building that determine its ability to withstand disruptive events and programs and procedures that minimize impact and enable an appropriately rapid return to operations. An effective building design should anticipate and incorporate both types of resilience achievement elements.

Some of the important functional and operational factors affecting the resilience strategy are:

Building siting and layout should utilize a defense-in-depth approach against physical attack which considers concentric and progressive levels of defense, implemented through a combination of physical attributes (setback, hardening, access, avenues of approach, etc.), technology (CCTV, alarms, etc.), and planned operational processes for the facility. The goal is effective threat deterrence, detection, delay, response, and finally physical denial in the case of occurrence of an undesirable event.

Building siting and layout must also consider expedient access to the site and the facility by first responders such as fire department, police, and medical response vehicles and personnel, including access to applicable critical infrastructure to support their individual missions.

Defensive locations for critical utilities and backup systems should be selected. Defensive locations should be considered for protection from manmade threats, natural hazards, and potential accidents with a goal of maintaining post-event operability, or rapid restoration of services based on the specific needs of the facility. Redundant utility feeds to the site (power, water, communications, gas, etc.) should be utilized to the greatest extent possible.

Site considerations should also include egress pathways and areas of refuge for building evacuees, including multiple physically separated locations with appropriate standoff distances. Elimination of line-of-sight targeting for ballistic protection should be considered in the design. Design in urban areas presents challenges in these approaches. 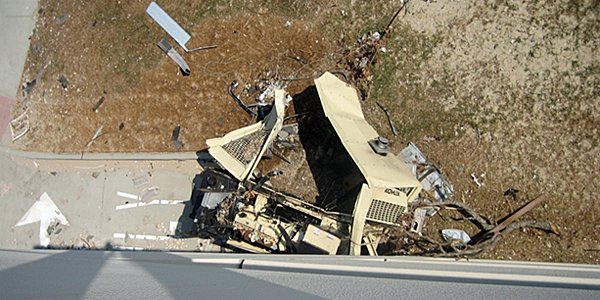 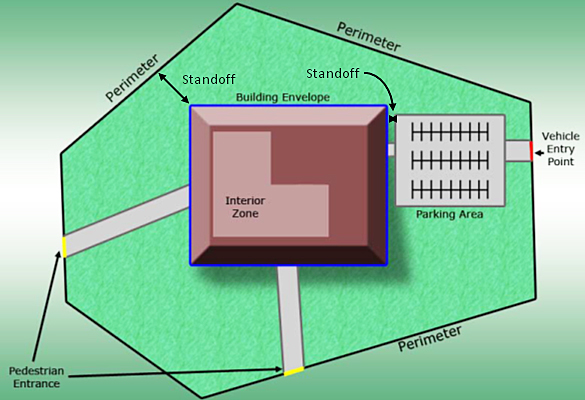 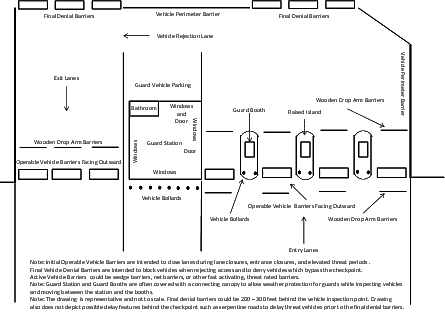 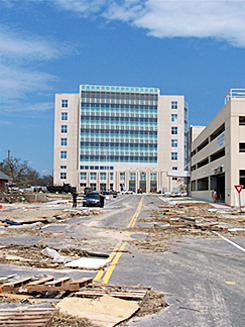 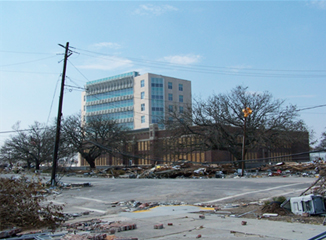 Passive measures developed to provide protection for building personnel, property, equipment, and operations against potential manmade threats and natural hazards that may test a building's resilience include the effective use of architecture, lighting, landscaping, and other building and site features specifically designed to:

Perimeter protection passive design features are used to control pedestrian and vehicle access to the site. Multiple methods can be used to accomplish this for a variety of configurations and rating levels: 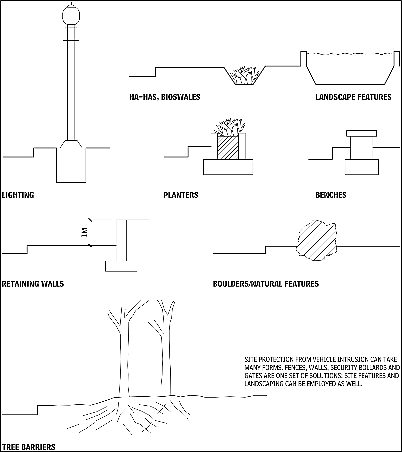 Passive design measures should also include appropriate anchorage and attachment of exterior critical infrastructure systems for natural hazards that may impact the facility. 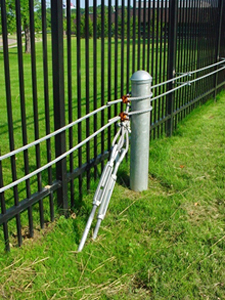 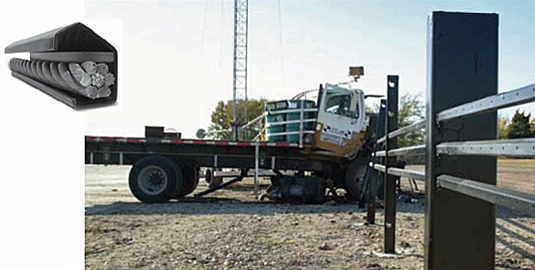 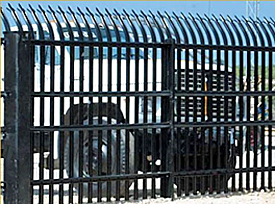 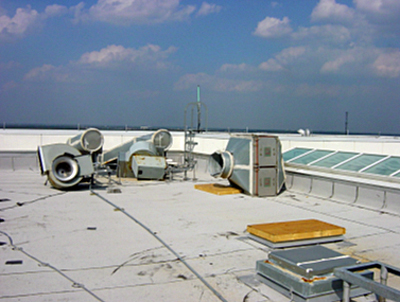 Active measures developed to provide protection for building personnel, property, equipment, and operations against potential threats and natural hazards that may test a building's resilience include the effective use of tested systems, equipment, and technologies specifically designed to:

Active design components selected to provide these functions include: 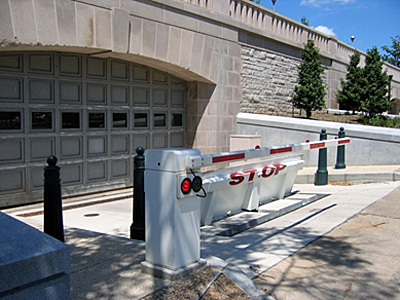 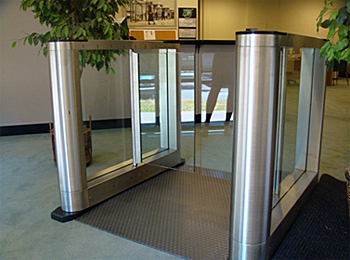 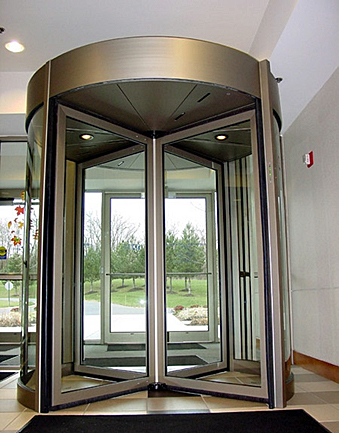 Clear distinction should be made between operational and life safety/security infrastructure when evaluating system needs during building design, as levels of criticality and prioritization for each may vary widely. Sustained operations for building operational infrastructure will vary based on tenant needs and should be evaluated to identify which systems require sustained operations, and which do not, with un-biased levels of criticality and prioritization for each. Life safety/security systems often require sustained operations through adverse events for a defined period of time.

One of the most desired goals of adequate resilience management is to try to avoid unintended consequences. For example, when devising a resilience improvement project for a particular asset of the community for flood mitigation, if the right precautions are not taken, the project could prove harmful later if/when an earthquake strikes the community (see Ettouney and Alampalli 2012b). Some of the concerns that can produce unintended consequences are: ignoring interactions within an asset or community, cascading effects, or multihazard interactions.

Different issues/considerations that control the operational and physical processes of assets and communities as identified in the section titled "Asset (Building) Resilience and Community Resilience" are interconnected via directional and/or non-directional links (see figures below for asset and community examples). Obviously, ignoring these linkages or interactions while performing any of the resilience management components could lead to erroneous decisions or computations, which might, in turn, lead to costly operations and the potential for unintended consequences. 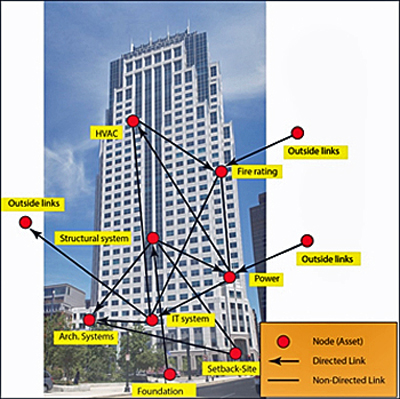 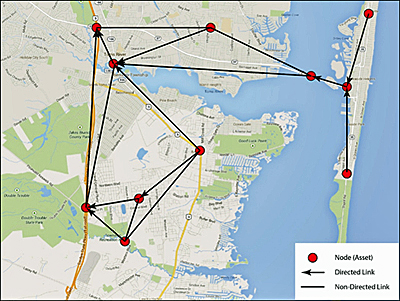 Cascading effects (CE) can be subjectively defined as a failure (or severe degradation in performance) of a single consideration within an asset or community that will propagate throughout the asset or community causing additional more failures.

There are numerous examples of cascading effects (CE). Progressive collapse of buildings is a classic example of CE. Another unfortunate example of CE occurred during the 2012 super storm Sandy, in the New York-New Jersey region. In short, there are examples of CEs in the aftermath of any natural or manmade disaster.

Assessment, Mitigation, and State of the Art

In order to assess CE on single assets, or communities of assets, the most important point is to enumerate a complete and accurate list of considerations/issues that affect the physical and operational performance of the asset (node), or community (network). Following the completion of such a list, an accurate estimate of how these considerations/issues are linked, and whether these links are directional, can be made. The directionality between two nodes will indicate which node affects the other or whether the linking between the two nodes is directionless. For example, in the Asset Resilience Links figure it is obvious that HVAC controls fire rating. With fire rating having a mutual (two directional) link with power which controls IT systems. The latter have a mutual (two directional) link with HVAC. Also, foundation behavior affects overall behavior of structural system which in turn can affect architectural systems. The final important step in assessing CE would be the accurate estimation of the properties of both nodes and links within the network. Following these three important steps, evaluations of the CE metrics can be possible either probabilistically or deterministically.

Assessing some of the CE metrics for an asset (node) or a community (network) of assets might constitute a first step for an asset or community manager. For if such an assessment reveals that mitigation is warranted, the effects of different mitigation options on CE should be included. It is important to note that CE can have effects on both costs and benefits of different mitigations projects. Because of this, changes of CE patterns and metrics need to be evaluated (either positive changes or negative changes) if a mitigation project is performed. Without evaluating CE changes and effects (positive or negative) unintended consequences might occur after performing mitigation projects. The figure below illustrates this unintended consequences factor. Currently there are limited available methodologies and tools that objectively include asset (node) -based or community (network) -based CE in either assessments or mitigation efforts. Any successful CE tool or methodology needs to comprise a healthy mix of subjective and objective procedures. Subjective procedures include: 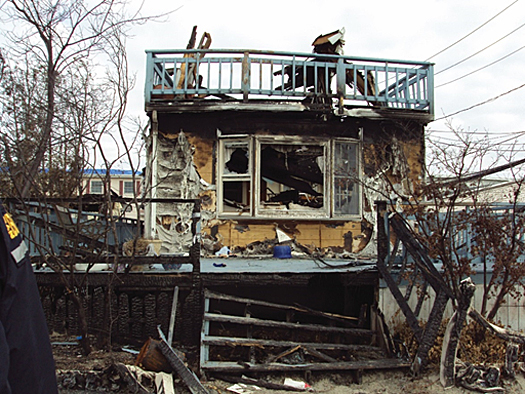 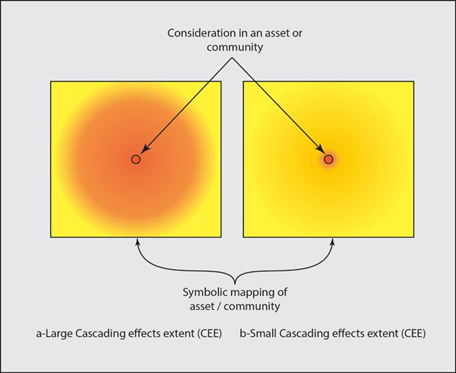 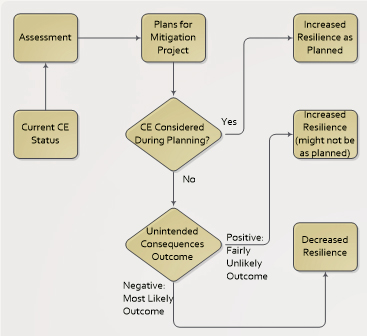 Cascading effects and unintended consequences in planning of mitigation projects

Loss of critical infrastructure at various points within a building's supply pathways can have severe to detrimental effects on the ability of that building to effectively function (user-based dependencies). Building resiliency should also consider the far-reaching effects resulting from loss of critical infrastructure, including corresponding cascading/propagating effects projected into the community (provider-based dependencies).

Design considerations for higher order and directional dependencies include:

Order and direction of dependencies

If a hazard is defined as any event that might degrade the performance of an asset or a community, it can be concluded that assets or communities are rarely subjected to just one type of hazard. Applying this general definition of a hazard, it is believed that abnormal manmade events (such as bomb blasts) or natural events (such as earthquakes or superstorms) are considered hazards. Also consider lesser dramatic, but equally destructive processes, such as corrosion or normal wear and tear, as hazards. Ettouney, Alampalli, and Agrawal (2005) introduced a theory of multihazards, postulating that decisions regarding hazards in the civil infrastructure community will affect the resilience of the infrastructure, or community, due to any other hazard. This means that a multihazard resilience strategy needs to be implemented, as opposed to dealing with one hazard at a time. Failing to follow a multihazard resilience strategy might result in costly unintended consequences for assets and/or communities.

Examples of design implications may include:

External provisions such as site and building access points, avenues of approach, and equipment setup locations for accommodating rapid post-event access, response, and restoration of critical utilities and functions should be provided for emergency events, and for resiliency, should extended outages exceed the limits of any in-place backup systems. Such Recovery provisions should be precoordinated with the response agencies, with specific access points and types of services documented.

Functions for post-event access, response, and restoration to be considered include:

Hardening of facilities for events such as blast, ballistics, forced entry, and extreme wind events should also be precoordinated with first responder agencies, as entry into these locations during emergency response will be severely hampered unless appropriate measures, tools, and training are employed.

In assessing the importance of continued operations during design, tenant use should be paramount, as various locations throughout the building may have different needs regarding continued operations. As part of the planning and design process, evaluating the benefits of building resilience based on risk and continuity of operations should be performed. As noted earlier, this can be done using the DHS IRVS tool. Design considerations include:

To maintain continued operability of the building post-event, or resumption of building operations, the building owner should be prepared to obtain MOUs/MOAs with service providers regarding priority of service and potential work-arounds to maintain/restore service.