Form refers to the shape or configuration of a building. Form and its opposite, space, constitute primary elements of architecture. The reciprocal relationship is essential, given the intention of architecture to provide internal sheltered space for human occupation. Both form and space are given shape and scale in the design process. In addition, the placement of a building form in relation to its immediate site and neighboring buildings is another crucial aspect of this form/space relationship. Just as internal space is created by voids in building form, exterior space can be defined or poorly defined by the building form as well.

For instance, consider the difference between an infill building that fits tightly within its' site boundaries (leaving no unoccupied space on the site, except perhaps a defined outdoor courtyard) and a freestanding building located within a large expanse of parking. Without the aid of other space-defining forms such as trees, fences, level changes, and so forth, it is very difficult for a large space to be defined or satisfactorily articulated by most singular forms.

A number of aspects must be considered in order to analyze or design an architectural form, including shape, mass / size, scale, proportion, rhythm, articulation, texture, color, and light.

Mass combines with shape to define form. Mass refers to the size or physical bulk of a building, and can be understood as the actual size, or size relative to context. This is where scale comes into play in our perception of mass. See Fig. 5. 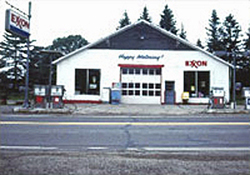 In general, proportion in architecture refers to the relationship of one part to the other parts, and to the whole building. Numerous architectural proportioning systems have developed over time and in diverse cultures, but just a few specific examples are listed below.

Since Antiquity, architects have devised proportioning systems to visually unify all the parts of a building through the same set of proportions. This process creates an internal coherence and sense of order apparent in the building, even if the underlying proportioning system is not known to the observer. These systems can be arithmetic, geometric, or harmonic.

Most contemporary buildings are proportioned according to the industry standard unit size of the primary mass-produced building materials employed. Based on the inherent properties of each material, conventional sizes and proportions have resulted. For instance, bricks, concrete masonry units, light wood members, plywood, and gypsum wallboard are always fabricated and sold in conventional sizes. The dimensions of these elements form another unit of measurement within the building.

The structural capacity of a particular material results in distinct proportions. The maximum span and depth of a stone lintel is very different than a steel lintel because of different structural properties. See Fig. 12.

The reoccurrence or repetition of architectural elements, shapes, structural bays, windows, etc. establishes a rhythm, which may be regular or complex. A static building possesses a rhythm, while the movement of inhabitants through a building may also establish a pattern or rhythm of human movement. See Fig. 13 for an example of how adjacent individual building rhythms also create a larger street wall rhythm.

How building surfaces come together to define form is often described as "articulation." The treatment of edges, corners, surface articulation of windows (horizontal, vertical, static field), and the visual weight of a building all contribute to the articulation of the form. See Fig. 14.

Both texture and color are inherently linked to materials, and can be used to alter the perception of any given form. Consider how the shift from a light to dark paint color can radically reduce the apparent size of a room, or how a smooth stucco or rough brick finish can alter the size and visual weight of a house. As illustrated in Fig. 15, the same stone rendered smooth, rusticated, or intricately carved, results in different textures and colors.

Form is perceived differently depending on the light conditions within which the building is viewed. The prominent modern architect Le Corbusier emphasized the important relationship between light and form in his famous statement, "Architecture is the masterly, correct, and magnificent play of masses brought together in light. Our eyes are made to see forms in light; light and shade reveal these forms." (Le Corbusier: 29) See Fig. 16 for an example of the significant role of shadow in our perception of a building.

The following case study examines why a particular built form was used and how it enhances the aesthetics of that particular building. By comparing two buildings of similar programmatic use, in this case recent museum projects, we may see how the chosen forms were employed. The first example is the Metropolis Museum in Amsterdam designed by Renzo Piano Workshop. The simple building shape is reinforced by the large literal size, gigantic scale, and homogenous, light-absorptive copper cladding of the building exterior. Complex form and surface articulation is intentionally avoided in order to heighten the singular form. Because the museum is built above a highway harbor tunnel portal within an industrial harbor landscape, this form is quite appropriate to the scale and materiality of the surrounding architectural context. See Fig. 17.

The second example is the Guggenheim Museum in Bilbao, Spain designed by Frank Gehry Architects. Although also large in literal size, this design employs a complex, non-rectilinear shape that uses form and surface articulation to reduce the building scale. The choice of light reflective titanium exterior cladding further dematerializes the building form and uses light and shadow to continuously modulate the exterior surface. See Fig. 18. 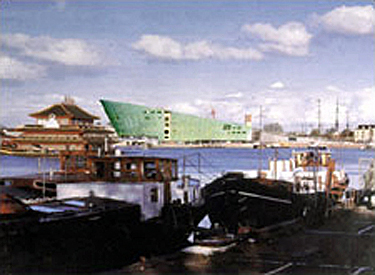 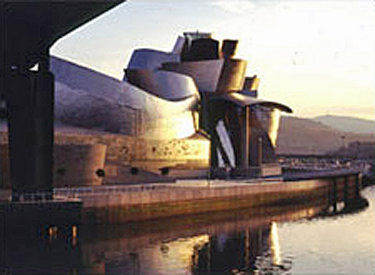 In both cases, a careful combination of a number of architectural qualities—shape, size, scale, articulation, texture, and color—work together to produce the desired form.

In some jurisdictions, architectural form is controlled or limited by both zoning and building codes. For example, a "Floor Area Ratio" (FAR) is often used to control the mass or building square footage allowable on a site of a particular size. For example, a 100' x 200' building lot of 20,000 square feet, with an FAR of 3, would allow a maximum building area of 60,000 square feet. If the building footprint completely filled the site, the maximum building height would be three stories, while a building that only occupied one half the site (10,000 square feet) would be built to six stories. In combination with building height limitations and "setback" or "build to" lines, the allowable mass and shape of a building is often tightly controlled.