by the WBDG Historic Preservation Subcommittee

Archaeological resources must be considered as early in the planning process as possible. Most federal agencies employ cultural resources specialists that have training in archeological site consideration, as well as the Section 106 process. Ensure that a cultural resources specialist, archaeologist, or historic preservation professional is part of every project team, and involve them from the beginning of the project. In almost every case, required archaeological excavations required due to a federal undertaking must be complete before the undertaking may proceed.

Several laws and regulations govern the treatment of archaeological resources. In all cases for federally-funded projects, compliance with these laws is mandatory. In some cases, violation of the law is a punishable offense subject to fines and incarceration.

Four of the more commonly-encountered laws are presented here to familiarize project managers with their responsibilities. When in doubt, consult with a cultural resources specialist employed by a federal agency or assigned to the project team.

The Antiquities Act of 1906

The Archaeological Resources Protection Act (ARPA) was specifically designed to prevent looting and destruction of archeological resources on public and Indian lands. Like the Antiquities Act, ARPA has both an enforcement and a permitting component. The enforcement provision provides for the imposition of both criminal and civil penalties against violators of the Act. ARPA's permitting component allows for the recovery of certain artifacts consistent with the standards and requirements of the National Park Service's Federal Archeology Program.

The Native American Graves Protection and Repatriation Act (NAGPRA) provides a process for federal agencies and museums to return (or repatriate) certain Native American human remains, funerary objects, sacred objects, and objects of cultural patrimony to lineal descendants, culturally affiliated Indian tribes, and Native Hawaiian organizations. NAGPRA may be a factor in construction projects where excavations, grading, or other ground disturbing activities are to take place. A copy of NAGPRA and its implementing regulations along with helpful material for NAGPRA compliance is available through the National Park Service.

On September 21, 2004, the National Museum of the American Indian (NMAI) opened its doors to the public after fifteen years of planning and construction. The NMAI is the most recent museum building addition to the Smithsonian Institution and to the National Mall.

In the 1990s, the Smithsonian began planning for the museum on the Mall. The Smithsonian was required to consider the effects of its actions on historic properties before any construction could begin. In accordance with Section 106 of the National Historic Preservation Act, the Smithsonian commissioned an extensive study of the site. Initial research into archives, libraries, and city records indicated that several buildings were constructed on the proposed NMAI site in the eighteenth century. As the research took form, archaeologists were able to pinpoint the location of several buildings and plan test excavations to determine if any remnants of the past remained. 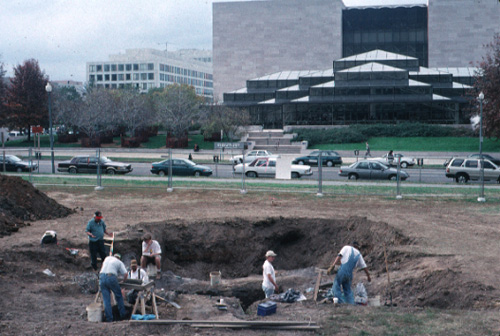 During their excavations, the archaeologists began to see evidence of artifacts which would only be found in a wealthy household, unusual in what was once a working-class neighborhood. One of the excavations was filled with an unusually high number of pieces of expensive porcelain, bones from quality meats, seeds from exotic fruits, hundreds of champagne corks, and women's grooming items. These finds provided evidence that one of Washington's most exclusive and expensive brothels was once located on the site.

The archaeology continued, and the site yielded much information about how Americans lived in the Federal City in the 1800s. Without this pre-construction work, this evidence of the past would have been lost forever. In addition to the information gathered at the site, artifacts now curated by the Smithsonian are available for study as a way to learn even more about history. Only through compliance with laws governing the treatment of archaeological sites was this project possible.

More information on the archaeological investigations is available at si.edu/ahhp/nmaidig_start. 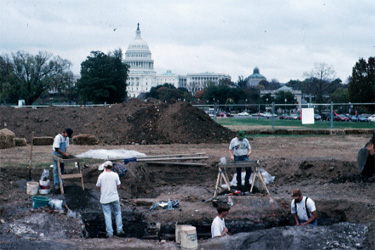 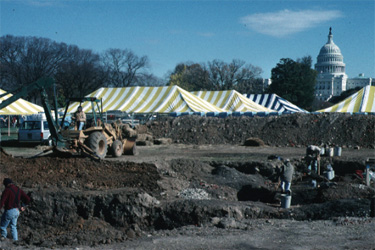