Understanding the Language and Elements of Design

In the late 19th century, Chicago architect Louis Sullivan wrote, "Form follows function." This dictum became one of the rallying cries of modern design in the 20th century, and it remains one of the best-known architecture aphorisms today.

What Sullivan implied was that a building's form is a natural consequence of functional requirements. For many, the statement seemed to advocate for pure utilitarianism in style. 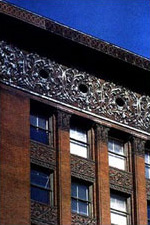 But even a cursory look at Sullivan's own architecture reveals some of the greatest ornamentation in American architecture. That observation lends weight to a counterargument:(*) that there are multiple ways of meeting the same function (getting people from the first floor to the second; bringing light into a room; making a hinge). Once one of those pathways has been selected, aesthetic considerations come into play. The architect is responsible for resolving all these elements into a singular building design.

From pre-Colombian civilizations and medieval times through today, people have constructed public monuments and private structures to provide shelter, ease daily survival, or expedite governance. And in every period these functional buildings have also embodied their cultures' principles of beauty—and, perhaps less explicitly, their underlying beliefs concerning spirituality, power structures, or civic engagement. Simply put, they have fulfilled roles and engaged aesthetics simultaneously. One should also keep in mind that architectural expression is constrained or, in some cases, shaped by by technical, economic, and social conditions.

Conceiving buildings in the present day, then, would seem especially difficult. Shifting cultural values provide only tentative benchmarks for assessment, and visual manifestations of those values—in other words, styles—are even less concrete. However, there have been attempts to codify standards of contemporary aesthetic achievement. Visual composition is taught in schools, for example. In addition, attempts at conceptual standards include the Guiding Principles for Federal Architecture, which President Kennedy signed in 1962. Among other things, the guiding principles advocate that public buildings reflect the dignity, enterprise, vigor, and stability of the federal government, while embodying the finest contemporary architectural thought; avoid an official style and express the spirit of the locality; ensure physical accessibility to all people; and incorporate the work of living American artists. In other words, the document advises architects to embrace democratic values, seek out innovation and individuality, and provide outlet for multiple expressions of creativity.

The Language of Aesthetics

It is relatively easy to determine whether a given design contains the necessary square footage or the correct number of rooms. Yet the complex nature of aesthetics makes for a more difficult conversation. To assist in this process, architects and designers share a vocabulary that helps them reduce complex ideas into short phrases. This terminology allows a project team's members to understand and communicate well visually and verbally to produce successful solutions. Moreover, terminology helps clients and building users to better understand aesthetics as architectural language: The way in which an individual architect or whole culture expresses values is in the way individual words become forms, and in the way those tangible parts are put together are sentence structure and grammar.

While it is not an exhaustive list of design vocabulary, below you will find brief descriptions of fundamental design elements. 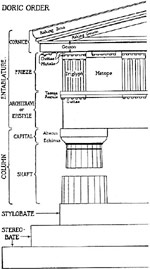 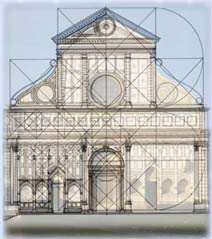 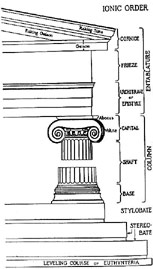 The Church of Santa Maria Novella in Florence, Italy dating between 1456 to 1470 is a great example of Gothic architecture with an Italian Renaissance façade by Leon Batista Alberti.

Style is a distinctive manner of expression or fashion at a specific time in history. In architecture, historical styles are often designated by a specific name such as Baroque, Victorian, or the International Style, to name a few.

Mass and shape define form. Mass refers to the volume defined by a structure relative to its surroundings and to its solidity and weight. Shape is the composition and complexity of the surface planes.

Both exterior and interior building materials should be selected based upon their appropriateness for the building type, durability, impact on the environment, climatic conditions, and the prevailing architectural design and character of the installation.

Useful introductions to architectural design, the design process, and design decision making include the following: